Paul Gambaccini’s Radio 4 show ‘For One Night Only‘ is quite a rare thing: a radio show about (rather than playing) music that manages to avoid being joyless, self-indulgent and too long. Perhaps it helps that each episode is built around a specific historical event — usually, and in this case, a live concert. This helps to keep things focused and grounded, and there’s much less of the conceptual tangent-wandering you sometimes get with programmes about the arts.

The episode I’m talking about is this one from 2008. It looks back at the BBC Prom of 21st August 1968, when (Russian) Rostropovich and the (Soviet) USSR State Symphony Orchestra played (Czech) Antonin Dvorak’s Cello Concerto, amid protests in London and calls for the concert to be cancelled. Why? Because, that day, Russian tanks had invaded Czechoslovakia.

I would have loved to see Rostropovich play at any time, but this really would have been something else. It is often said that music, sport, culture in general, can and should be kept separate from politics. This concert is a powerful counterexample. Shouting in the audience, protestors outside, tanks in Czechoslovakia, and on the stage a tearful Rostropovich playing the music in such a way as to make it ‘completely clear whose side he was on’.

The CD is available on BBC Legends, here, and now I’m going to buy it. But there’s a final, poetic sadness. On the recording that survives, the shouts of protest from some in the audience as the music begins have been removed. I’d take the original any day, sullied and tainted as it was by the low politics and human tragedies of its time. Just as live music should be.

Quite a few people I know who use a Mac like to take advantage of the UNIX-like Terminal from time to time. I use it for remote logins to the computer clusters that do my PhD work for me, but there are all sorts things you can do using the built-in command line utilities, and for certain automated or repetitive tasks it’s often far quicker than using a graphical interface.

I recently found a great application called TotalTerminal which takes control of OS X’s inbuilt Terminal app and allows it to bring up a terminal ‘visor’ just by pressing a shortcut, a bit like the console in iD Software games like Quake, Doom etc. This is very handy if you want quick access to the command line regardless of what else you’re doing at the time, and it’s very customisable too. I use ‘Apple+§’ to bring up a terminal from the bottom of the screen, so that I can quickly use SSH to check on my simulations.

I don’t listen to many podcasts at all, but there is one that I’m so obsessed with that I sometimes can’t sleep without listening to an episode. The Peacock and Gamble podcast is hosted by comedians Ray Peacock and Ed Gamble, it’s about nothing in particular, it sometimes has regular sections (if that’s possible), it’s edited down to half an hour and it’s released every week for free.

It’s probably best to start from somewhere near the first episode, and by the time you’ve listened to a few and made friends with Ray and Ed — which is very easy — it all makes sense. Unlike a lot of shows in this vein, it comes across as completely uncontrived. It’s just two naturally funny people who have great chemistry together, enjoying and exploiting the complete freedom the format gives them. 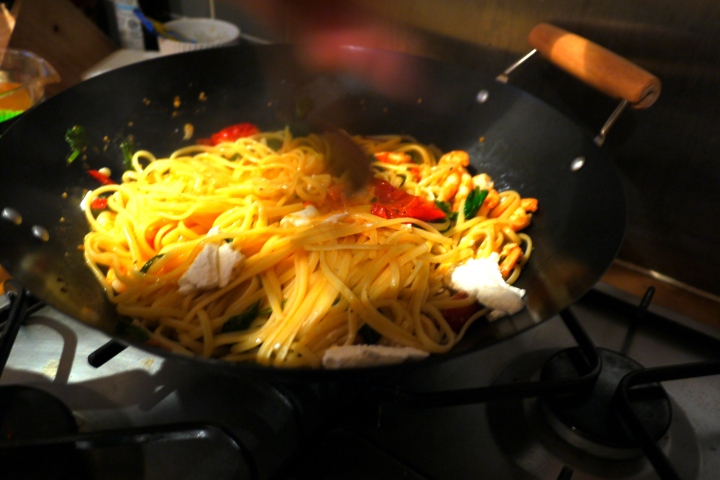 Here’s a picture of some pasta I made recently for my friends Mazep, Emma and Tom. It’s linguine with king prawns, tomatoes, and spinach. Also, there’s quite a lot of chilli, and some ricotta which I put in right at the end. Whenever I’m doing pasta with fresh tomatoes I find it’s best to get horribly expensive ones, even at the expense of other ingredients. Or, move to Europe for a bit.

Welcome to my website and blog. I’ll be using this to post about things which interest me such as music and science and cookery, as well as to link to examples of my work, and to people I work or play with. Take a look at the various sections and look out for updates and posts if you like.

🚨 tickets are available (link in bio) for the 23rd august at @eastsidejazzclub with @abhitchcock @yaydavis and @emmarawiczmusic guesting. it’s going to be great, come along if you can!
thanks to @helpmusicians for helping me to return to @royalacademyofmusic this september for the second year of the masters. it’s been a really valuable and growth-y year out of studying, thanks to everyone who’s been part of that and finally thanks to john hartley @loveforsalelondon for taking this photo of me wanging on about something down at @jazzattheoxford
this saturday afternoon in brixton, come to @friendshipadventure for free to see me and @alexandra.ridout play duo. lovely venue (a brewery) and lovely beer.
@alexandra.ridout 🔥on one of my tunes, with @jonnymansfield @abhitchcock @yaydavis.
a clip of @abhitchcock being great alongside @yaydavis @jonnymansfield @alexandra.ridout. see my youtube channel for the whole thing!
looking forward to return to @friendshipadventure this saturday afternoon with the great @rileystonelonergan. free entry, #jazz #livemusic #livejazz #beer #brixton #camberwell #lambeth #soithkondon